Lily, the caretaker’s daughter, was literally run off her feet. Hardly had she brought one gentleman into the little pantry behind the office on the ground floor and helped him off with his overcoat than the wheezy hall-door bell clanged again and she had to scamper along the bare hallway to let in another guest. It was well for her she had not to attend to the ladies also. But Miss Kate and Miss Julia had thought of that and had converted the bathroom upstairs into a ladies’ dressing-room. Miss Kate and Miss Julia were there, gossiping and laughing and fussing, walking after each other to the head of the stairs, peering down over the banisters and calling down to Lily to ask her who had come.
It was always a great affair, the Misses Morkan’s annual dance. Everybody who knew them came to it, members of the family, old friends of the family, the members of Julia’s choir, any of Kate’s pupils that were grown up enough, and even some of Mary Jane’s pupils too. Never once had it fallen flat. For years and years it had gone off in splendid style as long as anyone could remember; ever since Kate and Julia, after the death of their brother Pat, had left the house in Stoney Batter and taken Mary Jane, their only niece, to live with them in the dark gaunt house on Usher’s Island, the upper part of which they had rented from Mr Fulham, the corn-factor on the ground floor. That was a good thirty years ago if it was a day. Mary Jane, who was then a little girl in short clothes, was now the main prop of the household, for she had the organ in Haddington Road. She had been through the Academy and gave a pupils’ concert every year in the upper room of the Antient Concert Rooms. Many of her pupils belonged to the better-class families on the Kingstown and Dalkey line. Old as they were, her aunts also did their share. Julia, though she was quite grey, was still the leading soprano in Adam and Eve’s, and Kate, being too feeble to go about much, gave music lessons to beginners on the old square piano in the back room. Lily, the caretaker’s daughter, did housemaid’s work for them. Though their life was modest they believed in eating well; the best of everything: diamond-bone sirloins, three-shilling tea and the best bottled stout. But Lily seldom made a mistake in the orders so that she got on well with her three mistresses. They were fussy, that was all. But the only thing they would not stand was back answers. 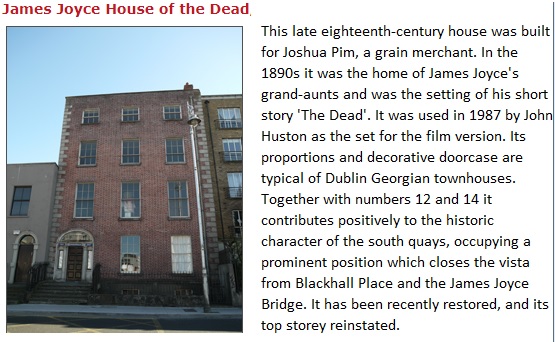 * Chris Power: A brief survey of the short story part 32:
Joyce subtly lays the ground for each “epiphany”: the moment, towards which each of these stories build, when pointlessness gathers itself, however briefly, into something revelatory.